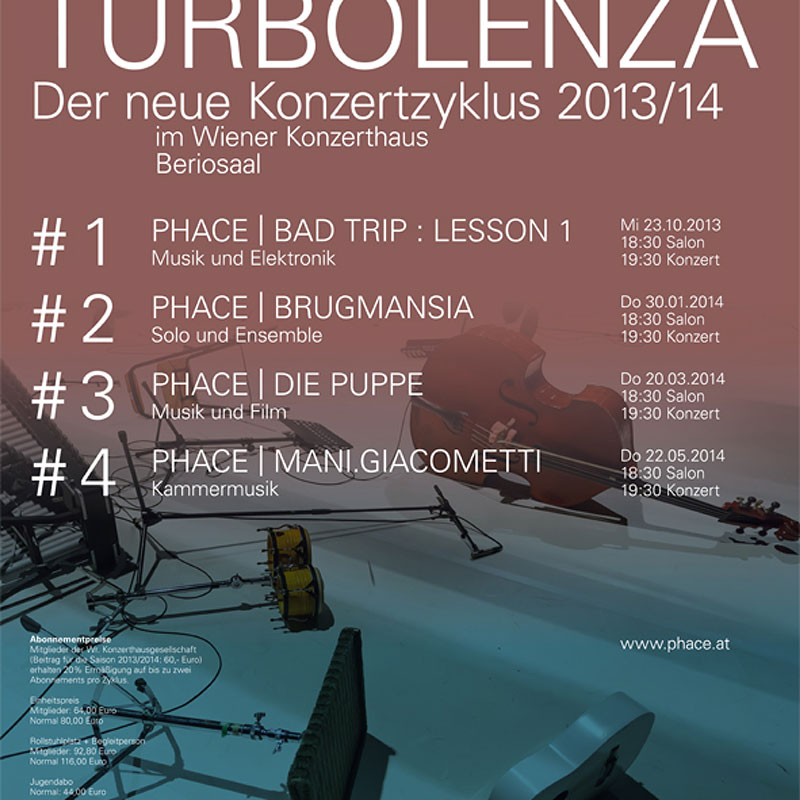 After the hugely successful first concert-cycle, PHACE now opens its second season at Wiener Konzerthaus. Like before, each of the four performances at the Berio Saal will be dedicated to a unique theme. As usual, projects featured will comprise multiple genres and disciplines. In four concerts, we will provide manifold ways to access new music making, which includes the intersection of music, film and electronics. Aside from world premieres, works will be heard that have not been presented in Austria as of yet. We are happy to announce that we may bring to you the world premieres of creations by Wolfram Schurig (Austria), Oliver Weber (Switzerland) and Ricardo Nillni (France). Moreover, we will bring to you a short, yet by no means less exciting selection of pieces by the new generation of composers including Francesco Filidei (I), Peter Kerkelov (BUL), Laura Jayne Bowler (GB), Misato Mochizuki (JAP) and Franck Bedrossian (F). You will be surprised how rich and diverse compositions of the 21st century may be. Before each concert, we offer a ‘Salon’ (6.45pm, Wiener Konzerthaus), where we, together with the composers and musicians, provide deeper insight into the programme as well as the specific works.

The first concert of the cycle with the motto “Music and Electronics” will mesmerize with a world premiere by Oliver Weber (commissioned by PHACE) for ensemble and electronics (in collaboration with ICST Zürich), and Fausto Romitelli’s Professor Bad Trip: Lesson I, which will be the highlights of the evening.

In the second concert, we will present four inherently different works for soloists and ensemble. Our journey starts with Engelstrompeten by the young Laura Jayne Bowler from Britain, moves on to new works by Wolfram Schurig and Ricardo Nillni (Lars Mlekusch, saxophone solo), and takes us to the fascinating, virtuosic piano part of Modification by our composer in residence 2014/15 Michael Jarrell (Mathilde Hoursiangou, piano).

In the third cycle-concert we will show the incredibly curious as well as timeless silent-film Die Puppe (‘the doll’) by Ernst Lubitsch with music composed by the Czech Martin Smolka.

In the fourth and last concert of the cycle, the programme includes one of the main works of Modernist chamber music: Allegro sostenuto for violin, clarinet and piano by Helmut Lachenmann. The manifold audible linkages of movement and resonance in this work cast a spell on the listener, which intensifies with every second that passes. Additionally, there will be three more truly individualistic pieces of chamber music by Misato Mochizuki, Franck Bedrossian and Pierluigi Billone. Billone’s MANI.GIACOMETTI for violin, viola, and cello invites us into a world of sounds that truly elicits wonderment.

SALON at the Berio-Saal-Buffet
Before each concert, we offer a ‘Salon’ (6.30 pm, Wiener Konzerthaus), where we, together with the composers and musicians, provide deeper insight into the programme as well as the specific works.

TEAM
As in the past years, Simeon Pironkoff will conduct all four concerts in 2013/14. The 12 members of the ensemble PHACE stem from Austria, Slovakia, Italy, Bulgaria, France and Switzerland. In 2013, Maximilian Ölz (double bass) joined the ensemble and is now our 12th member.

concerts in this series