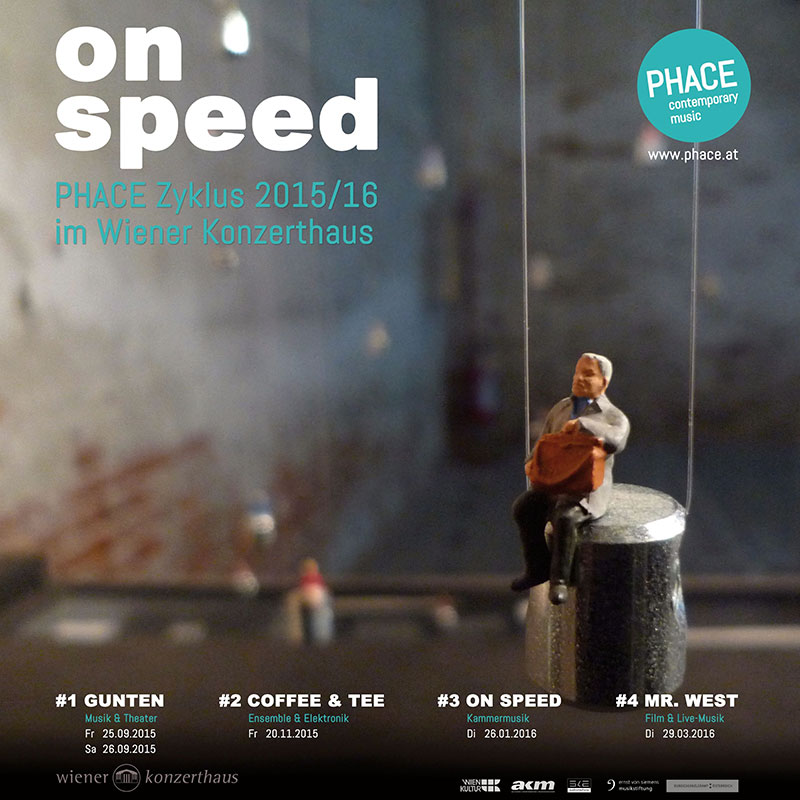 With ON SPEED the concert series «PHACE» already meets its forth season and shows up more varied and manifold than ever.

Helmut Oehring’s marvelous quartet „Locked-in“ at the cycle concert on March 23rd 2015 already gave some foretaste of what extraordinary and stirring sounds are yet to come, when his music theatre «Gunten» (based on the novel by Robert Walser) will be performed at the first concert date. In this unsettling story of „Jakob von Gunten“ – staged by the young German director Steffen Jäger – musicians and actors intermingle with each other in a thrilling way, thus featuring how power, discipline and the perversion of education and control lead into disaster.

In the second cycle concert – made up of three parts and organized in collaboration with WIEN MODERN – our main focus lies on works by female composers, whose styles are as different as they can possibly be: Olga Neuwirth, Joanna Wozny, Ying Wang, Katharina Klement (WP) and Chaya Czernowin (WP) as a highlight, who is also composing a new piece for us.

In addition, a work by Peter Jakober (winner of the Erste-Bank-Composing Competition 2015) and Beat Furrer’s linea dell’orizzonte will be performed. For the third cylce concert we have been looking for novelties by young composers again, little or not at all known yet within Vienna. In Austria, Germany, France, Chile and Switzerland we made a find. The six composers came up with gripping, sonorous and virtuosic music as a mesmerizing vision of a contemporary music, as personal and individual as possible. With his oeuvre «The Extraordinary Adventures of Mr. West in the Land of the Bolsheviks» Lev Kulešov, pioneer of the Soviet western – and just like Sergej Michajlovič Ėjzenštejn one of the leading figures of the montage theory in the post-revolutionary „Storm and Stress“ of the Russian silent film – (UdSSR 1924) created a ludicrous western commedy, which is set to music by the young composer Judith Varga. For the first time with this production the cycle is concluded in the Great Hall of the Vienna Konzerthaus.

Events included in these series:

Get your ticket now and become a member of the PHACE-Community!

As subscriber you will get detailed information sent by post mail one week before the concerts.

Members of the Wr. Konzerthausgesellschaft (Contribution for the 2015/16 season: €65,-) receive a 17,5% discount on up to 2 subscription series per season.
Tickets online!