Funded by the FWF Austrian Science Fund
The project is hosted by the KUG University of Music and Performing Arts Graz, Centre for Gender Studies
Produced in cooperation with Wien Modern 2020

The performances will be carried out at the announced time in an adapted form as part of the research project of the Art University Graz. The filmmaker Michaela Schwentner will film the performances. The film will be made publicly available free of charge at www.wienmodern.at at the earliest possible point in time; the release date will be announced as soon as possible.

Combining the distinctive creative process of choreographer Paola Bianchi with the compositional practice of Pia Palme, the piece is being devised in an experimental, non-hierarchical, collaborative way, using both devised material and improvisation. The question of transmission between disciplines is woven into the process, embracing the particularities of each individual. Soprano Juliet Fraser brings in her expertise as performer, bringing together Palme’s score with Bianchi’s oral instructions, giving feedback at every step during the process. The theatre scholar Dr. Irene Lehman and Christina Lessiak, musicologist and cultural worker, join the group and further enrich the collaborative practice and discourse. The results explore the consonance, dissonance and interferences between voice and body, a polyphony in which movement shapes music, sound shapes bodies.

The piece is an experiment, an experimental opera, a music theatre work in the widest sense. Pia Palme: ‘I began with some devised material which I knew would form only a starting point; the process is like walking into a room with a blindfold on.’

Paola Bianchi uses her archive of postures to work from: ‘I have been using my archive of postures (or non-postures, collective images), which I am interested to share with others to see how they are transformed. These are my tools. It is like seeing how different ingredients fit together or can be destroyed.’

More information about the piece can be found under https://www.fragilityofsounds.org/wechselwirkung/ 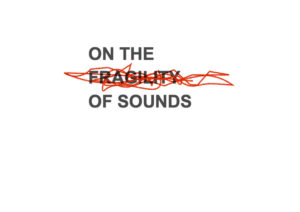